On one of our walks, we spotted a white gardening van that reminded me of my father’s! A nice memory. 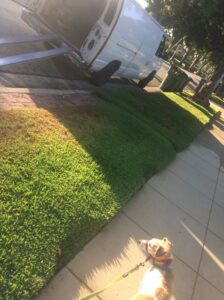 Some of you might have learned from my last newsletter, but I have sad news to report. I had to end the development of “The Big Bachi,” the independent film adaptation of my first Mas Arai mystery. I was helping to attempt to raise funds–I had even secured a fiscal agent, Visual Communications, to receive money so that investors could at least receive a tax credit (not sure if that’s even much of a benefit in light of US tax law changes!). I was able to raise enough to help fund a concept trailer but not much beyond that. I am thankful for the interest of the two filmmakers; a beautiful screenplay at least resulted from that effort.

I don’t regret the effort, which began with a Kickstarter campaign way back in 2016. I learned so much about the film industry and myself, too.

Here are some random thoughts:

1) I’m not good at raising money for my own projects. Some of this may be my upbringing and my sense of responsibility. If I ask people for money, I certainly want to deliver. So it’s stressful to ask for money for something that is so intangible such as a film.

2) There are not many grants that fund narrative feature films. Documentaries, on the other hand, have more various funding sources.

3) While we all were thinking “out of the box,” and setting “The Big Bachi” in the 1960s, when Mas Arai would have been in his late 30s, people seem to want the older Mas.

4) Producers have an extraordinary hard job, so if you are able to connect with a good one, be very thankful! Even if the project never reaches fruition (and chances are that it won’t), you are in a rare and fortunate position.

5) Everyone talks about streaming shows opposed to feature films, but is it as simple as people make it out to be?

Regarding the last point, I’ve been doing some homework on developing a work for a TV/streaming series. I’ve come up with some conclusions, which I will address in future posts on Wednesdays. Stay tuned!

In the meantime, here’s some homework for you:

I’ll be referring to these books and podcasts, so if this is a topic that interest you, give a read or a listen.