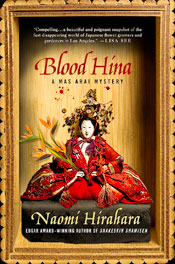 "And do you, Sutama Hayakawa, take this man to be your husband?" the minister asked, the third time that night.

Mas Arai, his hands shaking and wet, wasn't going to miss his cue again. He pulled out the simple gold band from the pocket of his windbreaker and, pressing hard, as if he had captured a sand crab from a California beach, held it toward his best friend, Haruo Mukai. And then, before it could be successfully transferred to the groom, the ring slipped from his sweaty fingers and plopped into the fishpond below them.

"Ah, oogoto!" screamed an old Japanese woman holding a clipboard and standing on a concrete walkway on the other side of the pond. "I think that koi is going to swallow it."

Before Mas could take any kind of action, Haruo's grandchildren had jumped into the pond, followed immediately by the grandchildren of Sutama, who was better known as Spoon. Fish tails of milky white and neon orange thrashed through the water in between soaked pant legs. Would Haruo's or Spoon's side of the family take the prize?

Spoon, Haruo's pear-shaped bride whose bulky sweater was no benefit to her ample oshiri, held on to the railing of the bamboo bridge, shell-shocked. Haruo, his skunk hair carefully arranged to cover the keloid scar on the left side of his face, tried to smile. "Howsu one more try, Mas?"

This wedding rehearsal was a disaster from the very start. Spoon showed up forty-five minutes late, saying her youngest daughter had taken her car without telling her, so she had to wait for another daughter to pick her up. All the grandchildren, meanwhile, had arrived, pulling at mondo grasses, terrorizing the koi, running through the bamboo, and hopping on the worn bridge. Mas could just imagine the reaction of his fellow gardeners who tended the Japanese garden in Los Angeles's Little Tokyo for close to nothing. The Gardeners' Federation was big on "volunteer"—Mas didn't believe in it because you usually ended up losing more than you put in. And for what? A pat on the back and maybe a photo in the federation's newsletter. Mas preferred his charity be less visible, if visible at all.

As the bridge shook from all the commotion below, the minister, dressed in slacks and blue sweater, desperately held on to a stack of three lacquer bowls that were part of the san-san-kudo. Three, three, nine—fortuitous numbers, eternal numbers. Both Haruo and Spoon had sipped from the empty bowls two times each during the rehearsal. Tomorrow the bowls would be filled with sake—Mas wouldn't mind imbibing some rice wine right now.

Why was Haruo, at seventy-one years of age, even thinking of getting remarried? Might as well just buy two cemetery plots right next to each other and put a bow tie on one headstone and a veil on the other.

The two of them had met at the flower market, and their romance had bloomed while Mas had been answering an exceedingly rare call for help from his daughter in New York City. Perhaps if Mas had stayed in L.A., Haruo and Spoon's relationship would have never ignited. Because if anyone could put a damper on love, it would definitely be Mas.

Spoon was all right, Mas guessed. She was pretty quiet for a Nisei woman, the second generation to be in America, and when she talked, she was assari, a plain speaker who didn't bother to smooth out rough edges like those straight from Japan tended to do. Mas remembered how his late wife Chizuko could shuffle and arrange Japanese words like a master magician so that the unsuspecting wouldn't even realize that they were being rebuffed or insulted. She would have thought Haruo's remarriage was kurukuru-pa, plain- out crazy, but if she had been here at the wedding rehearsal, a perpetual smile would have been plastered on her face.

Even the men at the Eaton Nursery last week seemed mystified at Haruo's upcoming nuptials. "Why don't he just go to Vegas?" asked Stinky Yoshimoto, examining the sharp teeth of one of the metal rakes for sale. Stinky was king of bad ideas and he was fortunate that most in their circle didn't bother to listen to him. "There he could sneak in a game of pau gow and poker between the ceremony and honeymoon."

Except that Haruo was a former gambler, a recovering one, as he liked to say. Gambling fever had ruined his first marriage and he sure wasn't going to let it grab hold of his second.

"So you some kind of big shot in the wedding, I hear," Wishbone Tanaka chimed in. Wishbone, the former owner of his own lawn mower shop, was always concerned with status, even in the puddle of a world that they all inhabited. "Best man—oshare, ne."

"Best man" did sound highfalutin. Mas had never been best at anything in his life, other than perhaps regrets. Haruo could have easily selected Tug Yamada—a medal-laden veteran who was trusty and dependable and would never do anything like lose the bride's wedding ring to a giant fish. Or even Wishbone, who limped around with a walker, its back metal legs protected by two neon green tennis balls, would perhaps have been a better choice.

But Mas and Haruo shared something that none of those men did—the Bomb. While the experience was written all over Haruo's scarred face, it remained hidden in Mas's heart and mind. The two men hadn't known each other in Hiroshima, but when they learned that they both had been in the city during World War Two, their connection was forever fused together. Haruo talked too much, but his overflowing words often greased Mas's disjointed emotions.

So when Haruo asked him to serve as his best man, Mas hemmed and hawed, but they both knew that Mas would eventually give in. He always did.

Haruo now must have been regretting his choice, after Mas had presented him with the ring at the wrong time two times at the rehearsal and now it might be lost forever. The children were soaked and their parents, including two of Spoon's daughters, crossed their arms, their anger ricocheting from the hubbub onto Mas.

Haruo's grandson stood up in the knee-deep water. "I got it, I got it," he said, holding up a glint of gold like a prospector with a lucky find.