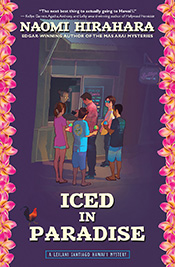 Leilani Santiago has left her post-collegiate life in Seattle to return home to the Hawaiian island of Kaua’i. Her mom’s been diagnosed with MS, and she wants to help keep afloat the family business, a shave ice shack. When Leilani arrives at work one morning, she stumbles across a dead body, a young pro surfer who was being coached by her estranged father. As her father soon becomes the No. 1 murder suspect, Leilani must find the real killer and somehow safeguard her ill mother, little sisters, and grandmother, while trying to keep the long-distance relationship with her boyfriend alive.

"The cantankerous Leilani and island setting intrigue... subplots [include] the troubled history of Hawaiian land ownership, the devastating effects of alcoholism...”
—Publishers Weekly

"A delicious multicultural mystery with an instantly lovable heroine, lively family dynamics, and a vivid sense of place. I inhaled it like my favorite shave (not shaved!) ice!"
—Sarah Kuhn, author of Heroine Complex

"Iced in Paradise proves why Edgar-winning author Naomi Hirahara is among today’s best traditional mystery writers. She magically intersperses Hawaiian culture with an intriguing murder mystery. It’s a good thing this is a planned series because you’ll want to spend lots of time with Leila Santiago and in her family’s shave ice store. The next best thing to actually going to Hawai’i."
—Kellye Garrett, Agatha, Anthony, and Lefty award-winning author of Hollywood Homicide

"After returning home to Kaua’i to help her family, Leilani Santiago finds herself in the midst of a murder investigation and torn between her loyalties. Naomi Hirahara perfectly captures Leilani’s Caucasian-Filipino-Japanese multicultural family, with its unique blend of traditions, dialogue, and food. Hirahara depicts local flavors and a gorgeous setting few Mainlanders ever see, along with the challenges of life on a tourist-driven island. This is a delightful new series that promises more compelling adventures of this sharp-witted, relatable heroine."
—Cynthia Chow, branch manager of Kaneohe Public Library, O’ahu

"In Iced in Paradise, we are introduced to Leilani Santiago, a refreshing millennial heroine full of wit, sass, and (as much as she may try to hide it) heart. I tore through this book, delighting in the authenticity of the setting as much as the nuanced cast of characters. Naomi Hirahara has once again crafted a complex mystery steeped in culture that readers will adore."
—Jill Orr, author of The Good Byline and The Ugly Truth 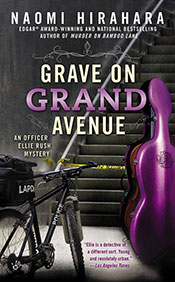 LAPD bicycle cop—and aspiring homicide detective—Ellie Rush is back on patrol in the next installment from the award-winning author of Murder on Bamboo Lane.

While patrolling one of LA’s premier concert halls, Ellie stops for a chat with a gardener—and is shocked to discover him minutes later, clinging to life at the bottom of a staircase. The claim is that he was knocked down while attempting to steal a multi-million dollar cello, but Ellie has trouble believing that.

Ellie has issues of her own to deal with—like the curious theft of her car—but after the gardener takes his last breath and the cellist mysteriously disappears, it’s clear that she must act quickly before someone else falls silent...

"I absolutely adore this series, and the second entry continues with strong writing and fully-developed characters... Ellie and the challenges she faces as a new police officer... will have readers yearning for more."
—Cynthia Chow, Kings River Life 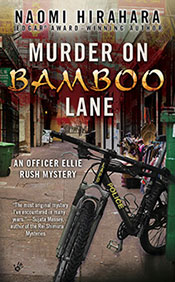 Bike cop Ellie Rush dreams of becoming a homicide detective, but it’s still a shock when the first dead body she encounters on the job is that of a former college classmate.

At the behest of her Aunt Cheryl, the highest-ranking Asian-American officer in the LAPD (a source of pride for Ellie’s grandmother, but annoyance to her mom), Ellie becomes tangled in the investigation of the coed’s murder—with equal parts help and hindrance from her nosy best friend, her over-involved ex-boyfriend, a smoldering detective, and seemingly everyone else in her extended family… only to uncover secrets that a killer may go to any lengths to ensure stay hidden.

"Readers will want to see more of Ellie, who provides a fresh perspective on L.A.'s rich ethnic mix."
—Publishers Weekly

"Ellie is a detective of a different sort. Young and resolutely urban, she represents Los Angeles as it is, rather than as it was."
—Los Angeles Times

"The most original mystery I've encountered in many years."
—Sujata Massey, author of the Rei Shimura mysteries

"One of the warmest, most realistic characters to hit crime fiction in a long time."
—Lee Goldberg, New York Times bestselling author

"A great series opener... Hirahara paints a mesmerizing portrait of the Los Angeles she knows so well."
—Henry Chang, author of the Jack Yu mysteries

"Hirahara delivers the goods in this first of what hopes will be many mysteries involving bicycle cop Ellie Rush."
—Gary Phillips, author of the Ivan Monk mysteries

"From the first page, Ellie Rush and her world seemed real to me and I was glad for every moment I spent there."
—S.J. Rozan, author of the Lydia Chin and Bill Smith mysteries

"Ellie Rush is a wonderful new protagonist, the plot is gripping and the book is a winner."
—Denise Hamilton, editor of the Los Angeles Noir anthology