Tulo wishes you a Happy Year of the Rat! Since Jack Russell Terriers are ratters, he’ll be keeping his eye on them! 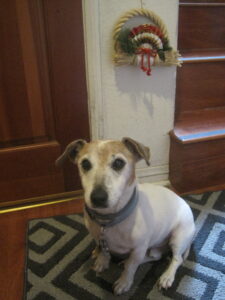 When my mother was in her twenties, she had sukiyaki parties with her friends in Hiroshima.  Instead of bring your own booze, it was bring your own extra ingredient.  To complement the sliced beef, it could be cubed blocks of tofu, a tangle of graykonnyakunoodles, sliced napa cabbage or the Wonder Bread of noodles, white pillowy udon.

It was a risk, you see, as no one would consult with one another.  So you might end up with a stew of beef and only konnyaku, made from the devil’s tongue root, which in its plant form looks positively phallic.  That was the fun of it.  Not knowing what might result at these sukiyaki get-togethers.

As my mother tells us this, the steam from the sukiyaki fogs her bifocals.  Our small family is gathered around the electric pan this past Christmas Eve.  There’s no red and green Christmas tablecloth, no holy candles.

Dad stays at the table for only a few minutes.  His emaciated body in his loose pajamas, he sits bent over a bowl.  He is only able to manage a teacup’s worth of rice, meat and sauce, if even that.  He returns to bed.  Our youngest at the table, Rowan, only two, smiles widely, his mouth full of a mash of rice and meat.  He is oblivious that life is literally seeping out of our family circle.

Christmas for me always feels a little odd, like putting on a nice piece of clothing that doesn’t quite fit.  It’s bad enough that we are here in Los Angeles, with joggers and bicyclists ubiquitous on our sunny December streets.  It does seem foolish to send cards and sing songs centered on snow and glowing fireplaces – definitely more myth than reality.

And for me, it’s not about faith and religion even, because I became a Christian convert at an early age on my own.  But I grew up with smells of broiled salmon instead of gingerbread during the holiday season.

Don’t get me wrong; there’s usually a Christmas tree and even decorations; I’ve even hand made a few.

In my childhood, Christmas Eve was usually spent at the house of another gardener’s family in Altadena.  Bunk beds and rooms filled with children, it was lively and raucous.  The parents would spend all night around a mahjong table, the rumble of tiles sounding like the revving up of a small airplane.

The boy around my age was glued to a transistor radio.  “Santa is above Whittier.”  “Santa is above Monrovia.”  He’d provide the rest of us regular reports while his older brothers pelted him with insults.  “You’re too old to believe in Santa.”

We’d usually stay until it was way past midnight.

One Christmas, I doze off while sitting in between my parents in the front seat of our van on our way home.

My mother laments that she doesn’t have time to secretly bring out my presents from Santa.

I open my eyes halfway.

She sighs and says, “You know there’s really no Santa, Naomi.”

And yes, it comes as no shock at all.

This year, our first holiday without Dad, Mom asks what we should do on Christmas.

I say, “Let’s make this a Sukiyaki Christmas.”  Let’s huddle together around the electric skillet, each pair of chopsticks drawing out something different for our respective bowls of rice.

Let’s just sit elbow to elbow in the linoleum-floored kitchen, tossing in different meats and vegetables, being washed in a steam of sugar, soy sauce and mirinand hearing the Lakers game in the background.

We will be a smaller circle this Christmas, but nonetheless still a circle.  Heck, if we are feeling adventurous, maybe we’ll play that game of my mother’s young adulthood, each bringing something for that evening’s sukiyaki, not knowing what will be in excess and what will be in want.

Whether your Christmas will be full of joy, sadness or Chinese food, I hope that you enter 2020 with a sense of peace. Much love to all of you, my readers.

Tulo got a Christmas tree this year. Decorated with Tulo-centered ornaments. He wishes you all a happy holiday. 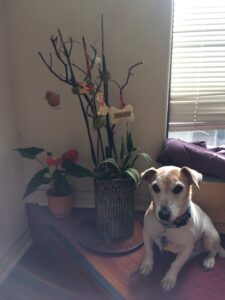 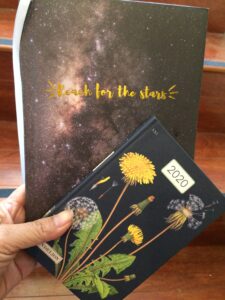 I’m already anticipating 2020 as my year of the three Cs: cultivation, creativity and contemplation.

Other than being a part of a short story anthology, I won’t have any new books published. Although I’ll still be attending three mystery conventions–two in my home state of California, I won’t be on that hamster wheel of a self-financed book tour. Both my husband and dog will be very happy.

I’ll be spending a big chunk of my time at the living room table, typing away on my laptop, traveling in my mind to 1944 Chicago and contemporary Kaua’i. And while I look forward to deep and sustained times of story cultivation, I know that I also need to be careful not to get into trouble on various social media platforms, the freelance writer’s water cooler. Here’s where the contemplation comes in.

It doesn’t surprise me that mindfulness and meditation have been incorporated in many writer retreats and even healthcare programs. We’re not going to last long relying only on our limited physical bodies to carry us through these uncertain times. So I’m going to attempt to let go more, even perhaps release my identity as writer. I’ll still be writing but I’m going to check my motivations for my actions more. I want to get used to being on the sidelines, listening and observing. 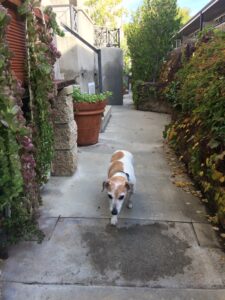 We are getting parts of our complex painting and while I was talking to the contractor, Tulo decided to leave our place and see what was going on. I’m going to have to close our door more firmly!

As I’m leading a life of writing, I also have to prepare for the next as well as the next next. In fact, I started doing some heavy duty research for the book I’m writing now about two years ago, while I was writing the final Mas Arai mystery, HIROSHIMA BOY, which was published last year.

For people who are more linear–who like to approach projects from A to B, then B to C, etc., this may seem like a wacky way to work. How can you write a novel, while preparing for something that you may be writing two years from now. I find that I need to start planting seeds early, testing out different soil and planters, to see the best container for my story. It’s best to start this mental experimentation while I’m actually writing something else. This way, the growth of story can be more wild and organic. It’s like that patch of seeds that you planted, but haven’t watched consistently. I’m not counting on its development to sustain me financially just yet. Later, when I’ve seen how the seedlings have responded to sun, I can figure out how to manipulate it, prune it and tie it down.

Research is a delight in itself for me and unlike writing sometimes, requires a map and a plan. I feel like I’m traveling the high seas, understanding the steps I need to go forward, but also knowing that there will be surprises. 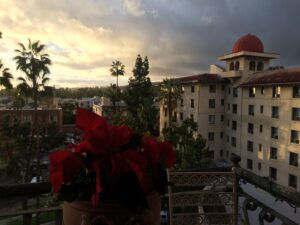 Tulo: “First you put this ridiculous raincoat on me and now you are taking a picture of me peeing? No shame.” 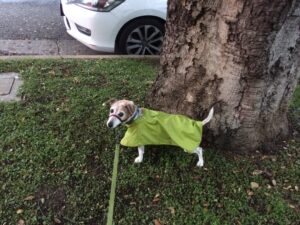 As National Novel Writing Month has ended, I’ve started to think about the balancing act that writers face in terms of action versus thinking.

In some ways, I’m definitely a woman of action. I’m intuitive and listen to my gut. If my heart tells me to jump, I usually jump. I made my decision to write books at a very young age–maybe 9 or 10. So one summer, with a big stretch of time, I decided to do it. I didn’t quite finish, but I did start a book. It was derivative and unoriginal, completely outside of my own experience. (I was only 11!)

Discipline and stick-to-it·ive·ness are definitely essential ingredients to completing a book. But for it to be good and relevant–those factors are harder to identify. I might have mentioned this before, but short story master NVM Gonzalez was looking out a window and his wife asked him what he was doing. “Writing,” he replied. Moments of solitude and thinking are essential for us (at least me) to dig deep in what we need to write. Here being older can really be an advantage as we’ve observed and experienced life for a long time. Don’t be afraid to shine a light in those dark places. Be curious and learning at all times; you never know how a certain detail will hit you in a unique way. If you are writing beyond yourself, know that you have to entertain, delight or entrance the reader while you reveal your musings. So thinking doesn’t just reveal content but also craft.

Can you spot the snow on the San Gabriel Mountains? Tulo and I were admiring the view during a recent dog walk. #winter #snowinSouthernCalifornia 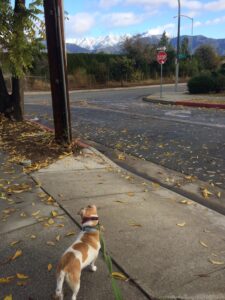