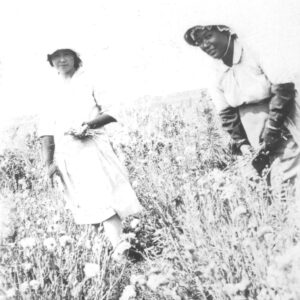 caption: Issei women, wearing bonnets and dresses, work in the flower fields. (Courtesy of the Mizufuka family. Please do not duplicate.)

(Note: I will be periodically posting excerpts from the many history books I’ve written over the years. This is from A SCENT OF FLOWERS: The History of the Southern California Flower Markets, 1912-2004 [written by Naomi Hirahara and published by Midori Books  in 2004].)

It was not unusual for Japanese American wives and children to work in the fields alongside adult men. Women and girls, with their smaller hands, seemed naturally suited for certain production techniques like the disbudding of carnations. Other tasks often adopted by wives and children were sorting and packing of flowers, usually conducted in a covered area.

This agrarian life was not always suited to new wives from the urban parts of Japan. According to family folklore, Shiku Satow, the wife of Tomijiro, was deathly afraid of insects and removed small bugs from flower using a pair of chopsticks. This fear soon subsided; Shiku, in fact, devoted her life to the grading or classifying of carnations for the family corporation until she retired at age 84.

While the Japanese relied on the hard work of all of its members for both economic survival and success, the outside world sometimes did not look kindly on these efforts. When the Southern California Flower Market was open seven days a week, various regional chambers of commerce attempted to force Japanese families to curtail work on Sundays. The Japanese Association of Long Beach was one organization that supported the elimination of Sunday work at least officially in November 1919. Even the Southern California Flower Market decided in a special meeting to abolish work on Sundays, aside from the picking of flowers for Monday market. Whether the members adhered to this rule cannot be verified.

Another issue was women working in the fields. Again chambers of commerce sought to change the Japanese growers’ cultural values and discouraged them from allowing their wives to do manual labor on the farm. Even the Flower Market agreed, telling its members that women should not work even on weekdays. If they did work, however, women should wear women’s work clothes–probably referring to aprons and white cotton caps with scalloped edges.

A Japanese American leader at the Long Beach meeting elaborated on the role of women in the family: “For our point of view we are in fault in using women, for their supreme duty is to build the home; that is what she is, she is queen of the home. We must better our living standards and thus overcome the anti-Japanese feeling in the community. Women’s main duty is to attend the home, to care for the children. I know there are economic reasons which we cannot apply to all; but I believe if you can help it, do not put women in the field. Keep your wife at home, and you will see improvement at once in the home.”

In spite of the rhetoric and public announcements, most Japanese farmers seemed to ignore these directives. Why listen to these leaders when they needed to put food on the table for their growing families?